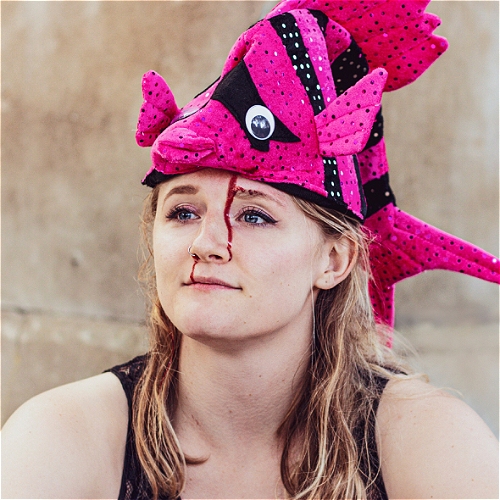 PLEASE NOTE: This is an online event and can be watched anytime. Ticket holders will be emailed a link to watch on 26 February or shortly after booking. The show can be watched with a VR headset, on a phone, or on a laptop. You can look around the stage, or fix your viewing in one place.

TUNA is a new darkly comic look at the unsexy side of girls growing up around guns; the knottiness of social mobility, and a meatier side of female criminality. It's a little less beautiful-bond-girl and a little more British school-girl. Semi-autobiographical and stored in brine.

Higher education is dangled in front of her face like a carrot on a stick. Before she can snatch it from the air, our girl must navigate her rehabilitation group; protect her cat-obsessed sister and fend off the cash fairy. She’s trying desperately to find an escape and not become a product of her upbringing. However, it's all made harder when the toys you played with as a kid were semi-automatic.

TUNA isn't going to solve anything, but it's going to tell you a story unlike anything you've seen before

After playing at various Off-West-End venues in London in 2019, TUNA had a full run at VAULT Festival, 2020.

“Nothing less than thoroughly captivating.” BroadwayWorld, ★★★★

Tickets $10 for single viewer or $15 per household

Theatre Online LGBTQIA+ Digi-Bits Drop In 18+
Back to Programme

( available tickets for this time.)